Evidence for the 'safety in density' effect for cyclists

This study from the Transport, Health and Urban Design Research Hub (THUD) explores the safety in numbers (SiN) effect for cyclists, and sets out to validate the results of prior simulation studies in a real-world environment.

The safety in numbers (SiN) effect for cyclists is widely observed but remains poorly understood. Although most studies investigating the SiN phenomenon have focused on behavioural adaptation to ‘numbers’ of cyclists in the road network, previous work in simulated environments has suggested SiN may instead be driven by increases in local cyclist spatial density, which prevents drivers from attempting to move through groups of oncoming cyclists.

This study therefore set out to validate the results of prior simulation studies in a real-world environment. Time-gap analysis of cyclists passing through an intersection was conducted using 5 hours of video observation of a single intersection in the city of Melbourne, Australia, where motorists were required to ‘yield’ to oncoming cyclists. Results demonstrated that potential collisions between motor vehicles and cyclists reduced with increasing cyclists per minute passing through the intersection. These results successfully validate those observed under simulated conditions, supporting evidence of a proposed causal mechanism related to safety in density rather than SiN, per se.

Implications of these results for transportation planners, cyclists and transportation safety researchers are discussed, suggesting that increased cyclist safety could be achieved through directing cyclists towards focused, strategic corridors rather than dispersed across a network. 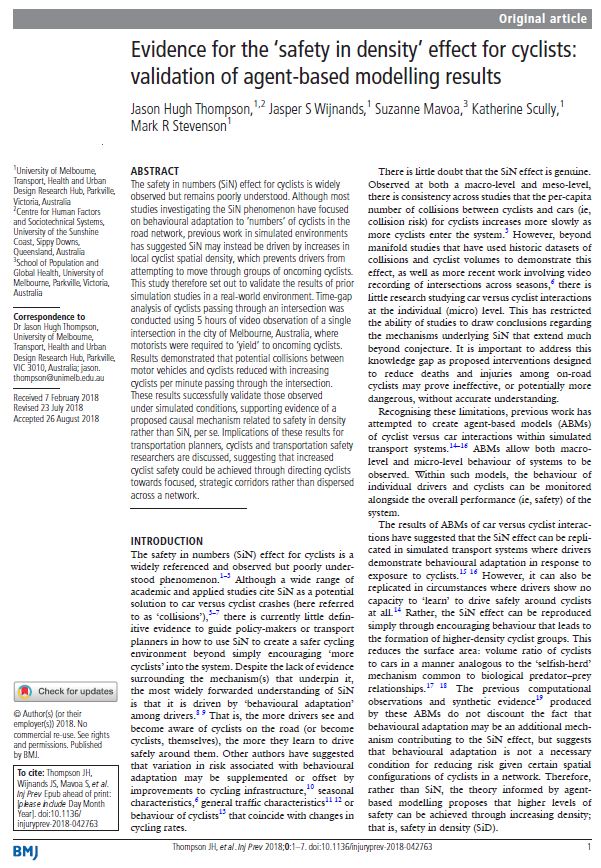